Can I just start by saying I am sooooooooooo jealous of all you mummies that got to pack a lunch and send the kids to school!!! Soooooooo totally jealous that it isn't funny!!!

We are now at week 7 of no school... The first week was him in isolation as he was to have his tonsils out ... Boogie was still in plaster to the knees due to serial casting oh and all our pre-op appointments which took a nice 3 hour chunk out of our Friday routine plus our normal everyday appointments made for such a busy week.

Week 2 saw him have his tonsils out on the Monday ... with complications!!! Yes we lead such a complicated life!!  Turned out he bled into his stomach and lungs and they had to inflate both of them to suck the blood out, I'm not surgeon but that sounds pretty complicated to me!!! To add to our misery we spent THE WHOLE WEEK in hospital due to him refusing to eat, drink and take meds.  Even the good stuff he didn't want it.  You just know in your gut that your child is sick if he is refusing to eat chips and chocolate!!

Come week 3 I was rocking myself back and forth in that creaky bloody hospital recliner!! You know the ones I am talking about.. Those chairs that make that 30 mins between pain screams and observations absolutely impossible to find a sweet spot and when you finally do it is time for them to wake up again and try meds or obs *sigh* Towards the end of week 3 we were allowed home on "Leave".  Basically they'd had enough of him and his torture and after taking him off his iv 10 mins prior... let us home to try and see if we could get him to eat, drink and take meds there.

It didn't work though!!! Week 4 saw us 11.30 at night saw blood gushing out of his throat, one panicked child, one FREAKED out mum and an ambulance ride later, we ended up back on the same ward, same room, different bed.  *sigh*  Another few nights of doom loomed over us.  We ended up with a lovely older nurse (grandma of many) who had such a lovely no fuss stance on boogie!! I loved it!!! It is how I am at home with him... no more tippy toeing around pretending it was the end of the world.  He had the medicine forced down, and surprise surprise he started getting better, slowly but surely!!

Of course there was then 2 weeks of school holidays of which we were both too horrified to leave the house and obviously couldn't go outside the 30 minute radius of the hospital for 2 weeks.  So it pretty much left us with art and craft... movies ... and various normal things around the house!!

Which brings me to week 7!!! This week!! TODAY!!! With the week from hell on its way!!  3 days sees 8 appointments... My pop is in the hospital too so taking nan to and from the hospital, and then the chores on top of that ... add in the impending bad weather ... Can't wait for thursday... back to school ... and a killer nap waiting for me on the couch!!!! 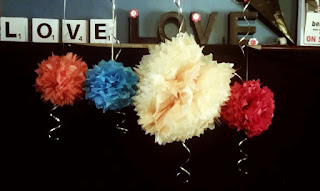 Some of our art and craft efforts!!

Were your school holidays as crazy as mine?! I know we all say we want an extra week cos they go to fast ... but I have been there ... I had an extra 5 ... Wanna trade? lol
Posted by Driving Miss Mummy Crazy at 4:47 AM