Have you got the song stuck in your head now??

So the day started amazing ... as per usual ... Boogie woke up sick with a nasty cough ... after having no sleep and ventolin every 4 hours ... I woke up in an awesome mood even with lack of sleep ... He ate breakfast ... he spent the day playing school games on his ipad ... and got to go play angry birds while I hung out some washing.... not on the ipad of course because I reserve that for all things school... I refuse to let him have it on there he turns into a little angry bird all on his own lol  ... He uses some uno stacko blocks with some little figurines we got from Hong Kong last year and builds AMAZING constructions. 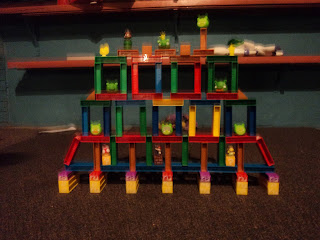 Anywayyyyyyyyyyy after I had finished it was time for lunch and I asked him to pack up the toys while I cleaned down the table for him to have some lunch ... which I might happily add he ate all of that too... Why did he eat it all?? Maybe because he knew he was in BIG trouble!!!  After what seemed like an hour waiting for him to pack up I heard him banging on the glass ... He was antagonising the dog banging on the glass ... goading her into jumping up from the other side ... *sigh* ... I tell him off at least 5 times a day for doing it ... because no sooner does she come inside it is like game on between the 2 of them!!!

Today was no different ... telling him not to bang ... yet he continued hitting the glass ... being hopped up on ventolin and redipred steroids for his asthma he wasn't listening ... That one final pounce between puppy and child at the exact same second out roared a nice big smash ... a shard of glass inches from his face, I put my hand in front to shop it from hitting him and got a small graze and cut myself .. They both knew they were in trouble ... the dog bolted as she usually does... So I checked boogie over and moved him into the lounge room and did the exact same thing for the dog ...

The lesson I think has sunk in today for at least one of them ... but why did it have to cost soo much?! lol Thank god for insurance and only having to pay the excess!!! Have your kids learnt anything the hard way?!


Posted by Driving Miss Mummy Crazy at 5:03 AM