So a while back .... we tried tweeting and getting the attention of Godsmack and their managers Oh and Soundwave organisers every year to try via their fb page to get Godsmack to Australia ... Because the chances of getting Boogie to the US to watch a show were pretty slim to none... And in turn found out I am USELESS at the world of twitter lol ..

Boogie has been an avid Listener of their music since before he could crawl.  Him and his dad would watch their Changes dvd ... youtube clips and he would always mosh out ..... Nawww my little headbanger .... *Insert mummy smooshy face HERE*

As the years have gone on ... His love of Godsmack AND their music has only become more solid .... Rock solid some would say ... Get it .. Yep I am funny even on a Monday morning!!

I have sooo many fond memories of Boogie in ICU with his Godsmack DVD on in the background .. or playing it on the Ipod ... And then suddenly last year ... BAM our prayers were answered!!!! Godsmack was coming to AUSTRALIA ... albeit the other side of the country to us as we are in Western Aus. but it was closer than they had ever been to us before and they were playing an All ages gig!!! Whoop whoop!!

As soon as tickets went on presale ... they were bought!!! So we started twittering unsuccessfully (mostly due to my unsavvy twitter type fail - Yes I am not a tech net savvy mummy .. alas) to organise a meet and greet!! :)

Anyway long story short Boogies therapists asked if they could nominate him for a Starlight Wish!!! .. Of course I said YES!! .. And the AMAZING magical fairies at Starlight went to work!!!

A few months after buying the tickets though a friend informed me that
Soundwave had been changed from All ages to 12+ which was the original concept .. needless to say for a short couple of days after finding out we were DEVASTATED ... But after an email to the Soundwave organisers ... yes a little bit of angst on my part... I received an email back ... It was like the Gods of Rock had sent us an angel wrapped in digital format all the way to my humble little email address ...

It was all set!!! Our anxious wait lasted for about 5 months until the day of the trip finally turned up!!!! ... Here we were .. Boarding a plane to the other side of the country ... to attend the un-attendable ... It was like all our magical fairies had aligned to created this AMAZING feat!!

I have to be honest though .. I was expecting a 1 min meet and greet ... shake hands .. get a signature watch the show kind of deal ... Which was better than anything we could have ever pulled off ..... But what Boogie received was far more!!!!!!!!!! For a start the Soundwave rock fairies - yes they exist (thanks Troy & Luke - our personal soundwave guide on the day) Organised a meet and greet with Sully & Shannon after the show for a few mins (as they had to fly off to Adelaide for the next show - Busy busy busy festival and soo grateful!!)


Then he got to MEET Shannon and Sullyyyyyyyyyy!!!!!! Oh and tell Shannon Larkin that he is a better drummer than Dave Grohl lol ... he seemed to have a good chuckle over that hehe

You seriously couldn't wipe the smile off his dial ( -yes cliche) by the end of the day...

But to boot he also had the Starlight wish to unfold...

So on Tuesday night we were picked up from the hotel by Corporate Cars Australia .... in a private car and taken to the FORUM in Melbourne ... We met with Godsmacks manager who organised special seats for us as it was an 18+ concert venue .... Boogie was getting high fives off random fellow concert goers ... the atmosphere was AMAZING!!!

And then he got the call and we were all escorted backstage with our Starlight wish fairy to meet the band!!! Boogie chatted with them about EVERYTHING .. his music that he likes to make .. Drums of course ... he got to sing with Sully ... Got a SIGNED drum head by all the guys and literally spent half an hour in their company just chatting about Stuff ... starwars .. transformers ... the koalas and baby kangaroos that the guys were excited to go meet ... And when they going to get ready for the show he got to go back to his seat watch some PappaRoach ... and wait for the EVENT OF A LIFETIME!!!! 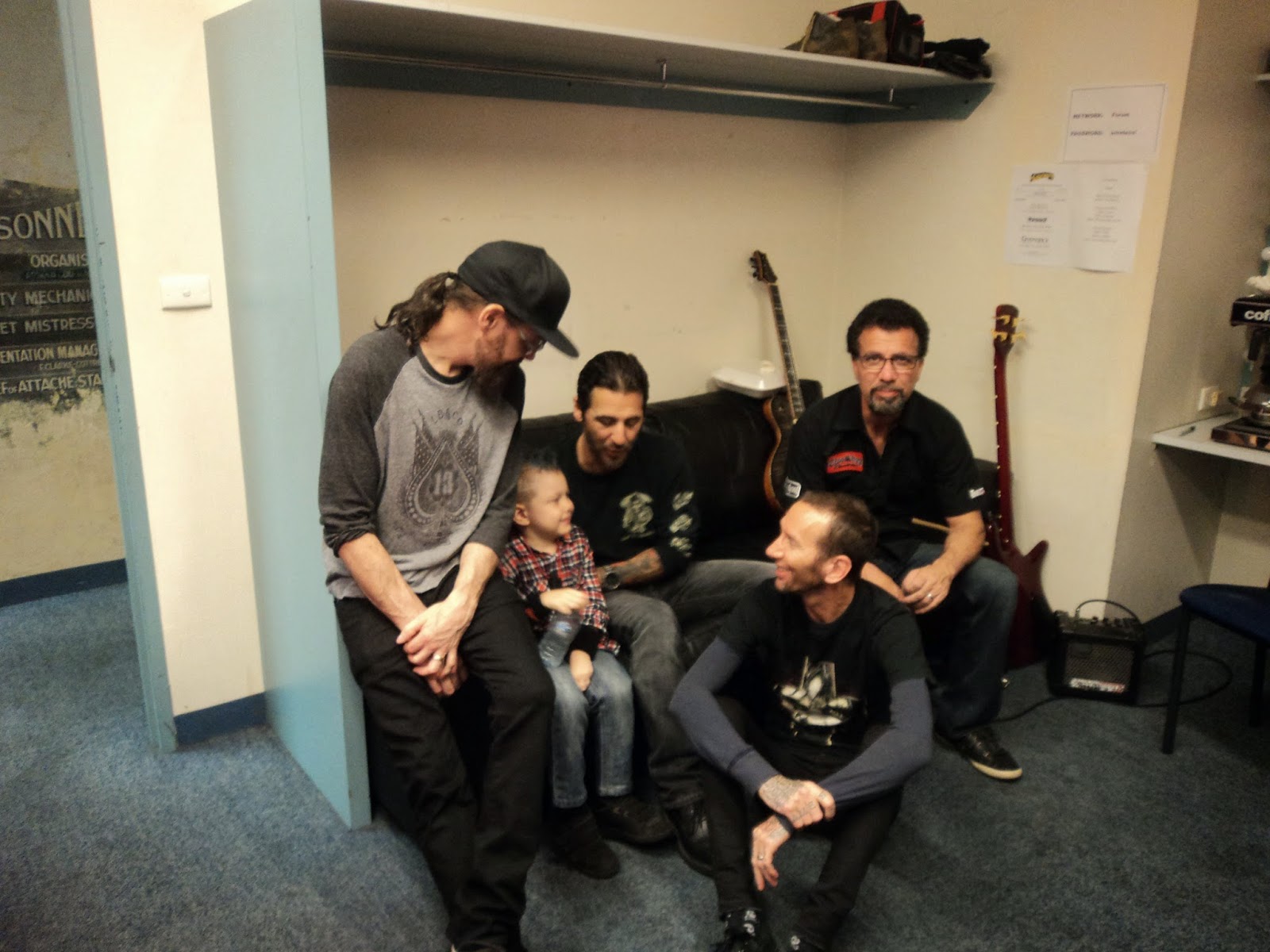 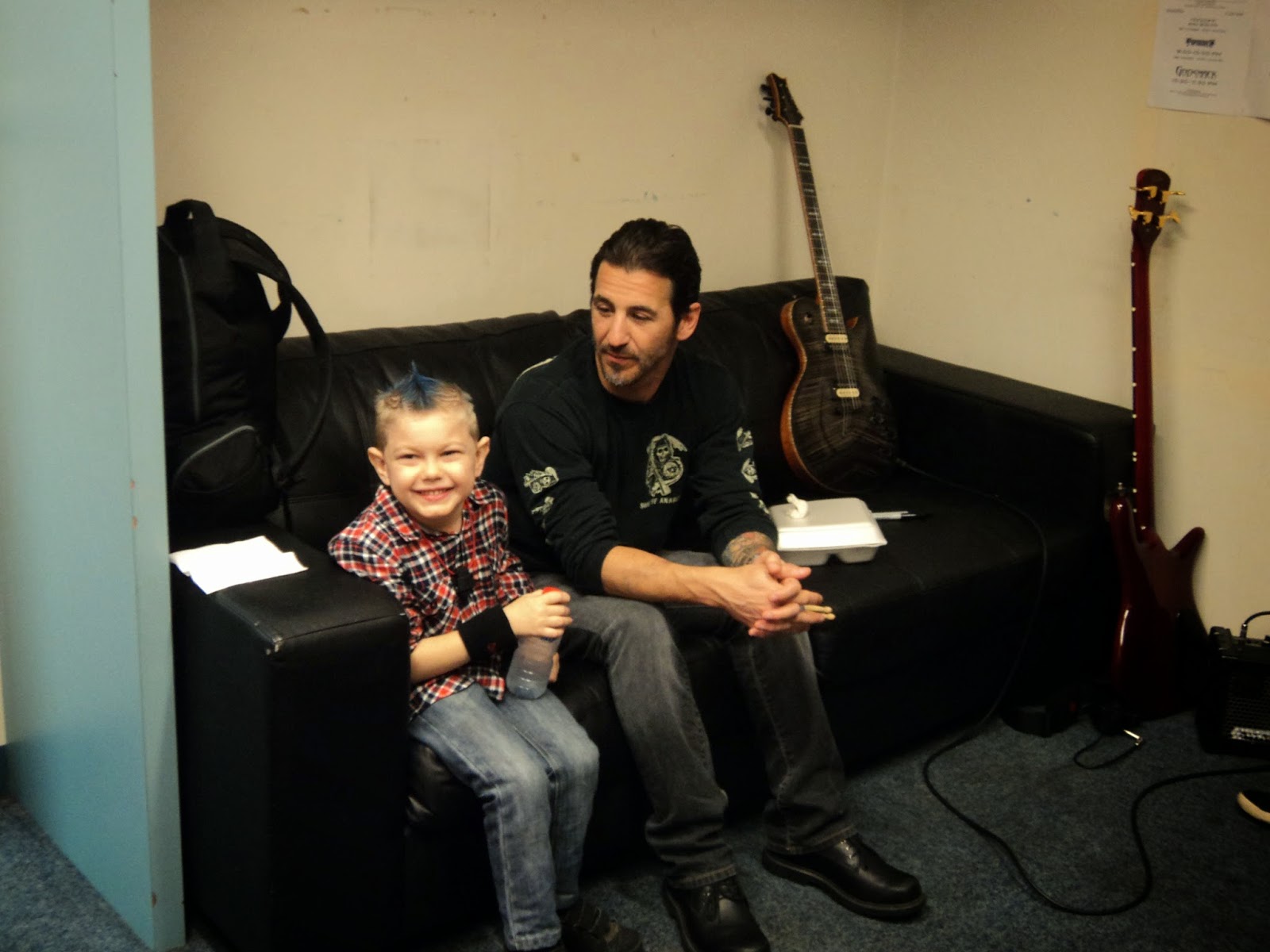 After the Show Boogie got invited up on stage to play with the Boys drumkits ... (I will link the Youtube video below) He was sooooooooooooo gentle ... nothing like he would be at home lol ... I have the dented drum heads to prove my point!!!!

It was the wish of a lifetime for my little man ... And still a week later you can't take that grin off his little face!!!! Thanks sooooooooo much to Troy and Luke from Soundwave ... Everyone at Starlight Australia .... And the biggest of thank you to Godsmack and all of their crew ... Each and every single one of you made it the most amazing experience for him!!!! Thank you a million times over!!!! Hopefully you boys can make it to perth eventually and visit Bon Scotts resting place that we were talking about!!